Ever so femme chocolate cake

I’ve been wanting to do a companion recipe to the ‘terribly butch chocolate cake’ for a while and this week went and presented the perfect opportunity. After Thursday’s question to the panel, femme things have been on my mind – and then I realised that I’d be making cakes for the birthday party of my oldest friend in the world on Saturday – and she’s the biggest femme I know. We had matching princess fairy dresses when we were little (hers was yellow, mine was pink), and we were convinced that we were going to grow up to be mermaids. I’m still holding out for that eventuality, but it turns out that she grew up to be a kick-ass engineer, travelling around the world having amazing adventures – complete with long blonde hair, perfect nails, and one of the most impressive dress and shoe collections I’ve ever seen.

So, in her honour, the ‘ever so femme chocolate cake’. It’s sweet, rich and full of vanilla – but never saccharine, and totally packs a punch – hope you like it.

First off: make this cake. It’s the best vanilla cake recipe I know – dense, moist and with the creaminess of texture that baking with yoghurt gives. I’ll admit, I find high femme style incredibly sexy – and nothing sexier than the brief, tantalising scent of someone’s perfume on the air – which is something vanilla never fails to remind me of. So vanilla it was. If a cake ever came close to the memory of kissing someone’s neck, this is that cake.

The batter should have a weighty feeling at the end of the mixing process. 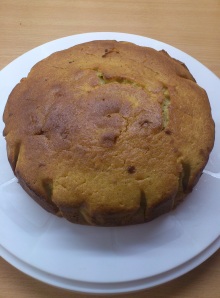 The top will crack – worry not! It just makes it even easier for the syrup to sink in.

Once the cake has cooled, get to work on the frosting – which is exactly the same as the frosting for the butch chocolate cake – only with colouring added, if you like. I went for a very pale antique rose, because it blended perfectly with the last and most important ingredient. 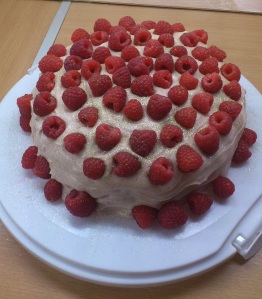 Raspberries! Loads and loads and loads of raspberries. The tartness is a perfect foil for the sweetness of the frosting, and gives you three distinct textures in each bite. I think that might also be a metaphor. Plus they’re pink – and, somewhere deep inside me, is a little person who never stopped loving things which are both pink AND glittery. That little person is very excited about this cake.

You are currently reading Ever so femme chocolate cake at a gentleman and a scholar.