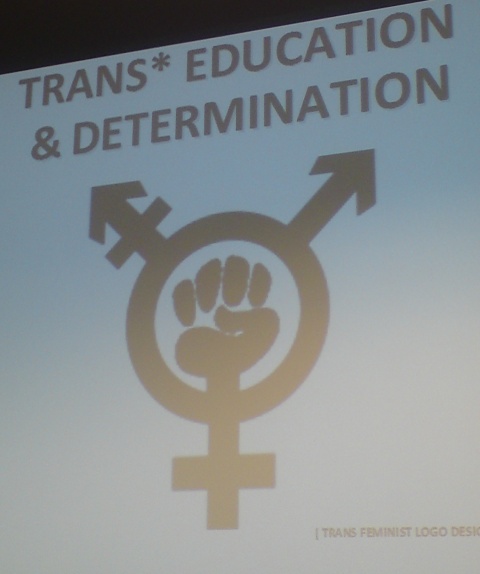 I'm so putting this on a T-shirt. Or even a T* shirt. See what I did there?

But a recap – TRED developed out of the planned protest against the (subsequently cancelled) Royal College of Psychiatrists’ problematic “Transgender: Time to Change” conference. TRED – a conference with an academic focus, impressively pulled together at the last minute, with no budget to speak of. Speakers: Ruth Pearce, Lynsey Moon, Kai Weston, Natacha Kennedy and Jane Fae. Attendees? Trans and cis people of all stripes. Couldn’t make it? Watch it on Vimeo – it’s good, promise.

I’ve said it more than once this year, and I haven’t been the only one. I think it bears repeating. When it comes to trans activism, it feels like there’s a definite change in the air. An electric charge, something palpable – I left the conference feeling totally elated. For me, the key lies in the title of the conference itself. Not just education – god knows education is at the heart of social change, and that the trans community has been patiently explaining ourselves for many, many years. But determination. “Not about us without us” is becoming ever more the rule to abide by. That so many of the attendees (let alone the speakers) have been or are actively involved in reaching out to the cis population – but that we’re doing it with dignity and pride. That sense of a right to autonomy, a lack of a apology – the laughter directed at those who think that we have to somehow justify our existence – it was intoxicating. It continues to be intoxicating. At every trans event/workshop/protest/social I’ve been to this year it’s been there – and it’s growing and spreading and strengthening. It fills me with a giddiness almost like falling in love.

And the reason for writing this? Maybe to say to everyone that that attitude can be theirs for the taking. To ask people to get involved. With planning the next TRED (next year, fingers crossed). With the Trans Community Conference 2011. With Trans Media Watch, Gendered Intelligence, Trans London – just my particular favourites, but find yours. Facebook and twitter and google – whatever your niche, or your location, there is something – or start your own, if you can’t find it. But I do advise you to try. This movement is growing wings – and the more people on board, the sooner we start flying.

§ One Response to Trans* Education and Determination: Part Two

You are currently reading Trans* Education and Determination: Part Two at a gentleman and a scholar.